- Dramatic drop in extra costs of buy to let due to mortgage fees, for all except the highest LTV loans - Short term fixes now less prevalent, as longer initial terms form a growing proportion of mortgages - Almost 1 in 5 of all available buy to let mortgage products (19%) are now five year fixed rate deals

Competition is driving buy to let lenders to cut their charges and fees, as well as to offer longer-term fixed rates, according to the latest Buy to Let Mortgage Costs Index from Mortgages for Business.

On average the effect of fees and charges on buy to let mortgages was to raise the overall cost for comparison by just 0.54% pa in Q3. This is significantly lower than the average of 0.67% extra in fees and charges seen at the start of 2013, and down from 0.58% in the second quarter of 2014. 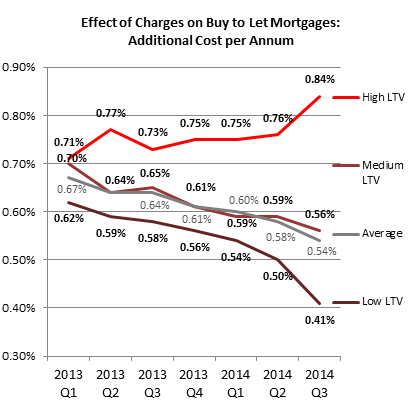 However, beneath this overall trend there is also a growing divide between fees for buy to let borrowers at different loan to value ratios.

Charges for low LTV (up to 65% of property value) and medium LTV (from 65% to 75%) buy to let mortgages have fallen dramatically.

By contrast, charges for high LTV (80% and above) loans have increased. In Q1 2013 the effect of these, at 0.71%, was broadly in line with that for medium LTV loans. Yet since then charges have mounted, to add an additional 0.84% to the average cost of buy to let borrowing at higher LTVs in the third quarter of 2014.

David Whittaker, managing director of Mortgages for Business comments: “Healthy competition is good news for landlords, who can now choose from a pool of in excess of 700 different buy to let mortgages. Meanwhile, the wider benefits of more buy to let funding are being felt by everyone in the private rented sector – including tenants who have seen a growing supply of homes to let this year.

“This is a vote of confidence in landlords, at a time when lenders remain under serious pressure to maintain the safest possible loan books

“Yet the details are even more encouraging.  Prioritising middle and lower LTVs is prudent – but the most encouraging signs are lenders offering landlords what they need.  Longer-term fixed rates are the best option for landlords looking to protect their future income and minimise any risk associated with interest rate rises, and there are now many more of these options available.”

Five year deals now make up almost one in five fixed rate mortgages on the market, at 19%, up rapidly from 15% in the second quarter of this year. 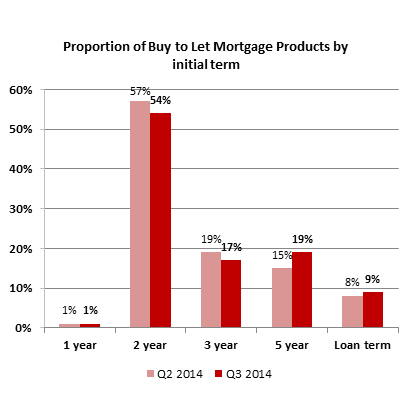 David Whittaker concludes: “As we predicted at the start of the year, buy to let lending looks set to total at least £25 billion in 2014.

“However, as the industry starts to look ahead to 2015, the most positive signs aren’t from the headline figures – but in the detail of how lenders are responding to demand for longer-term deals.

“Intrinsically, all landlords tend to have a long view.  Careful buy to let borrowers will not be thinking about the precise timing of the first rise in Bank Rate but rather what variable mortgage rates might look like in two or three years’ time.  So looking ahead, we may see a further increase in longer term fixed rate mortgage products as lenders respond to an increased demand for products that provide more stability.”