Mortgages for Business analyse the results from the Buy to Let Costs Index for the last quarter of 2014.

Competition has intensified in the buy to let mortgage market with more products as well as cheaper charges and fees, according to the latest Buy to Let Mortgage Costs Index from Mortgages for Business.

The choice of buy to let mortgage products has beaten the previous record with 817 different products now available compared to 707 at the end of Q3. A new lender also entered the market (Fleet Mortgages), adding to the growing number of buy to let products.

However, the cheapest mortgage rates and lowest fees have been reserved for low loan to value (LTV) ratios.

David Whittaker, managing director at Mortgages for Business, comments: “Lenders continue to compete fiercely for the ever-growing buy to let market with more than 100 extra products available in the last three months.

“This unprecedented pick up reflects the huge increase in demand as well as the wider importance of the buy to let industry.

“Looking at total lending in 2014 the trend is clear. For a second consecutive year the value of the BTL market grew by almost a quarter. We anticipate further growth in 2015 but at a slower rate as the market takes an inevitable breather after such a huge sustained spurt.”

Fixed rate mortgages are proving to be better value than their respective tracker counterparts, particularly for lower loan-to-value borrowers. Low LTV mortgages now outperform their tracker equivalents at 2, 3 and 5 year periods. Likewise, at medium LTVs, the costs for a two year fixed rate is 4.4% compared with 4.7% for the tracker equivalent, while for three year products the costs are the same and only 0.3% higher than the tracker products for five years.

Even for fixed rate high LTV mortgages, the current cost of borrowing is only marginally higher than tracker products. To fix for 5 years at a high LTV is just 0.4 percentage points more than the corresponding tracker.

Only one in a hundred landlords now opts for a one year initial mortgage term. More widely, the popularity of short-term mortgages continues to wane – 52% opted for a two year deal down from 57% six months ago despite the very attractive 2-year rates on offer. By contrast longer term mortgages are growing in popularity, with the proportion choosing 5 year mortgages rising from 15% in Q2 to almost one in five (18%) in the fourth quarter.

David Whittaker comments: “It’s astounding that fixed rate mortgages are already better value than their respective tracker counterparts. Again the real advantage is for the ‘safest’ landlords with the lowest LTV loans. But even though tracker products are a little bit cheaper at higher LTVs, in these cases too it soon won’t be enough to compensate for the likely increase in cost of trackers when rates inevitably rise. If customers are paying only a few percentage points above the negligible Bank base rate, then if this jumps it could mean a huge proportional increase in future costs.

“Capital markets are still reeling from tumbling inflation and a dovish outlook from the Bank of England that no one would have predicted six months ago. This is only just starting to have its full impact on the mortgage market and the finances of landlords. Yet it’s already clear that landlords haven’t completely abandoned caution – and are beginning to look at longer fixes and planning for higher rates within the next couple of years.”

The effect of product charges on the cost of borrowing has improved for low and medium LTV mortgages. At the lowest LTVs, the effect of charges have now fallen to 0.39% from 0.62% in Q1 2013. Medium LTV borrowers have also benefited with effective charges dropping to 0.53% in Q4 2014 from 0.70% at the beginning of 2013.

David Whittaker concludes: “These trends indicate that lenders prefer the safest borrowers who now have a vast array of competitive products to choose from. However, with rates bound to rise soon these kind of pricings won’t last for ever and we would advise borrowers to take advantage of the fixed rate deals on offer in 2015.” 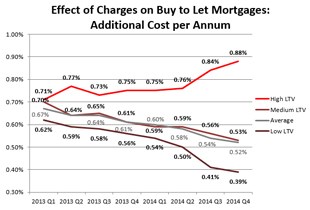