Following research into UK property, HSBC has produced a list of buy to let hotspots offering higher yields and greater potential for demand

According to the list, top areas for buy to let investment include Manchester, Kingston upon Hull and Blackpool and all feature high yield returns.

In response to the research, letting agents anticipate an increase in demand for their services as prospective and existing landlords are expected to build and grow their portfolios with properties from these areas.

Manchester was identified as the best location for buy to let landlords with the highest yields.

The strong financial benefits make the city a hub of property activity with annual rents rising four per cent in Manchester over the last 12 months alone.

This propels the average rental value from £38,316 per annum to £8,628 while an abundance of students living in the city provides an additional boost to the local property market.

More than one quarter (26.85 per cent) of all Manchester’s housing is privately rented; representing the highest proportion of rented property in any major UK city.

Demand for rental properties has also risen steadily in the city over the past year too with growth noted even despite increasing property prices which have jumped by around £4,000 since 2014.

Outside of Manchester and locations including Kingston upon Hull and Blackpool also performed well in HSBC’s study; taking second and third place respectively.

Tracie Pearce, Head of Mortgages at HSBC, explained that the research shows buy to let is still an attractive option for property investors but said regions where rents outpace house price increases should be the main focus for landlords.

“This means not just looking at large towns and cities, but also commuter areas and those with high rental demand and concentrated employment, such as a hospital or university nearby,” she added.

Landlords should research areas in great detail before deciding to invest in buy to let property as they will ensure they “feel confident that they can achieve good returns”.

Manchester, Kingston upon Hull and Blackpool are all potential hotspots to consider but there are other cities and locations worth considering too – such as Southampton which topped the list last year and fell just outside the top five in sixth place this year. 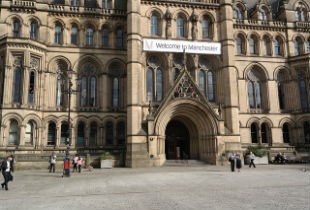