Brits looking to join the property ladder could be in for a long wait as average salaries of £41,000 are needed to buy a home

The study from KPMG suggested that affordability is now an issue for aspiring buyers who do not inherit money or have high earnings.

It refers to the widening gap between house prices and wages with the average salary needed for a purchase thought to be nearly double the UK average wage of £22,000.

As a result many people are turning to the rental sector, providing a boost in demand for landlords and buy to let investors.

A question of affordability

First-time buyers in London were found to need to earn £77,000 in order to purchase a home; a considerable amount above the average salary of £28,000.

The calculations in the study use a ten per cent deposit while the remaining 90 per cent is borrowed at 4.5 times the annual income.

Widespread variation was found between the north and south of the country, with Northern Ireland having the smallest overall gap between average wages and the level needed for a deposit.

In England, the smallest gap was noted in the North East were average wages were £20,149 compared with the £23,616 required for a deposit for first-time buyers. 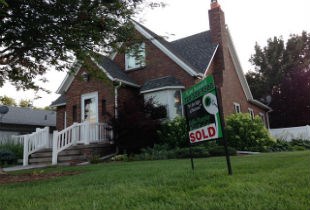