October’s Buy to Let Mortgage Product Index shows that there were on average 1,034 buy to let mortgages available to UK borrowers last month and that an average of 33 buy to let lenders were active in the market.

The number of buy to let mortgage products continues to rise month-on-month.

Product numbers topped the 1,000 mark for the majority of October, peaking at 1,066.

With regards to loan to value figures, there was no change from the previous month.

9% of buy to let mortgages were available to 80% and there were six products available at 85% LTV, but they made up less that 1% of the market.

These figures are consistent with the past six months, in that the split of products by loan to value has not varied greatly.

Average pricing of rates fell in October as lenders looked to meet their end of year targets.

The average fixed rate buy to let mortgage for a five-year term was 4.21% in October, as opposed to 4.37% in September.

Similarly, the average shorter term two-year fixed rate buy to let mortgage was 3.37%, whereas it was 3.47% in September. Year-on-year fixed rates fell by an even greater margin. 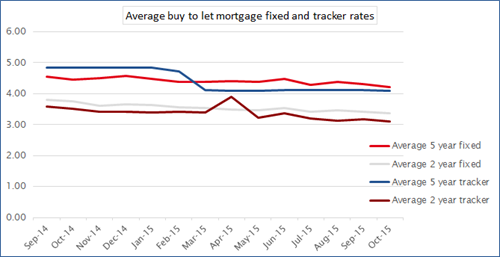 In October 2014 the average cost of a five year fixed rate buy to let mortgage stood at 4.46% and two-year fixed rates were priced at an average of 3.75%

This dip in rates is also evident when looking at the average tracker rates for buy to let mortgages.

Commenting on the Index, Jeni Browne, Head of Buy to Let and Residential Lending at Mortgages for Business said:

“For some time now, we have been of the opinion that many fixed rate mortgages at two, three and five years are offering considerably better value than trackers, particularly at lower LTVs”.

The data for Mortgage for Business’s Buy to Let Product Index is derived from its buy to let sourcing tool, Mortgage Flow. These averages do not include fees. 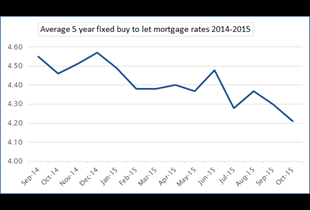