Since the cut to Bank Rate to 0.25% was announced we have been inundated with calls asking what this means for mortgage rates. Steve Bedford, consultant mortgage broker answers your questions…

Yesterday saw the first Bank Rate cut since the credit crisis of 2009, with the rate now set at 0.25% - the lowest ever seen in UK history! 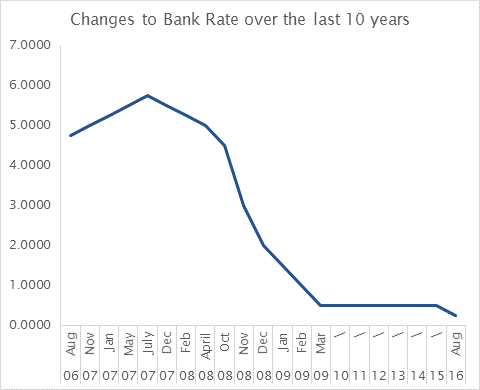 So, what does this mean for you and your mortgage payments?

I’m on a tracker rate, will my payments go down?
If you are on a tracker rate that tracks Bank Rate, you will see a drop in your monthly mortgage payments – unless a minimum was previously agreed by your lender. Cuts will start to filter through as early as next month. Coventry Building Society, Santander, Barclays and NatWest were the first lenders to pass the rate cut onto their customers, updating their systems within two hours.

If your mortgage tracks a different rate (e.g. LIBOR, SVR) your monthly payments will not automatically be reduced; however, the Bank of England has indicated that it expects lenders to pass on the reduction.

Lenders tend to announce their LIBOR rate every three months so you might find your mortgage rate goes down when the next announcement is made. If you are unsure which rate your mortgage tracks, call your lender or check your mortgage contract.

I’m on a fixed rate, am I going to lose out?
Probably not. Over the last few years, fixed rates have been very keenly priced and many are at record lows. I doubt they will go very much lower than they are now. We are keen promoters of longer term fixed rates because of the security they provide in terms of always knowing your exact monthly mortgage payment and, as a way of protecting yourself against future rate rises – nobody really knows when this might happen.

If you took out a fixed rate out recently, chances are you won’t suddenly be disappointed to see loads of new, lower fixes introduced. The drop in interest rates has been widely predicted and lenders have been factoring this in to their pricing.

If you are on a higher priced fixed rate it may be worth getting in contact with us to see if we can save you some money by remortgaging. In fact, every time your initial period is about to expire you should be checking to see if you can find a better deal – that’s what we are here for!

I was about to take out a fixed rate, should I continue, or put it off until rates settle?
As said previously, lenders were fully aware that a cut in Bank Rate was on the cards, so have been factoring it in to their pricing. Five year fixed rates are at the lowest they have ever been and we still can’t see them getting much lower.

For landlords and property investors it is also important that you remember that lenders are in the process of tightening up their stress test calculations! Putting off your application could mean you will find it a lot more challenging to borrow the loan amount you require.

To summarise, we suggest you continue with your plans. If you are nervous, pick up the phone and talk to us. It might be worth while getting an Agreement in Principle now – some are valid for up to six months. You could then switch to another product with the same lender if a lower rate does become available.

This would be at no cost to you if done prior to the issue of a formal mortgage offer, although an administration fee may be payable if this is carried out after the offer has been issued.

For more information and to talk through how the rate cut directly affects your circumstances please do give me or one of my colleagues a call on 0345 345 6788.

Jeni Browne, head of residential and buy to let lending looks at how you can protect yourself in this period of economic uncertainty.

Steve Olejnik, Sales Director looks at what hope Britain’s young people have of making their first step on the housing ladder now.