The Q4 2016 edition of Mortgages for Business’ Limited Company Buy to Let Index reveals there was a surge in the proportion of applications for buy to let properties made by landlords using limited companies at the end of the year.

The Index shows that the proportion of purchase applications made through a limited company structure jumped by six percentage points from 63% in Q3 2016 to 69% in Q4 2016. This is substantially higher than the 21% recorded before the changes to tax relief on mortgage interest were unveiled by former Chancellor George Osborne in July 2015.

Over the past 18 months, landlords’ behaviour has changed substantially as the sector comes to terms with the new tax regime. The increase in the use of Ltd Co structures includes both new purchases and “transfers”, i.e. purchases made by landlords selling their personally owned property to their limited company.

However, while there has been a significant uptick in number of purchase applications made by limited companies, the amount of products and lenders catering for them remained flat. Between Q3 and Q4 2016, the number of lenders offering products to limited companies stayed at 14.

Commenting on the results of the index, David Whittaker, Managing Director of Mortgages for Business said:

“The sharp increase in purchase applications made by landlords using a limited company structure is unsurprising given the financial incentive to do so, and it is encouraging to see growing numbers of landlords approaching their investments intelligently. With the changes to tax relief set to be phased in from April 2017, this trend is unlikely to be reversed any time soon.

“Despite the growth in the number of purchase applications made via limited companies, the number of lenders and products catering to this part of the market has remained flat. Although many mainstream lenders do not yet have an offering for investors using limited companies, many smaller lenders have significant expertise when it comes to servicing this part of the market.”

Data for the index is obtained from Mortgage Flow, MFB’s bespoke BTL product sourcing software and from its own transactional records.

The index focuses on buy to let lenders with commoditised products for Special Purpose Vehicles operating via intermediaries. Bespoke offerings have been excluded from the data.

Stress tests: Why you can borrow more via a Ltd Co
Borrowing personally or via a limited company – up until recently it wouldn’t have made much of a difference when it came to lenders’ stress tests but this is all changing. Gary McKenna explains how much you will be able to borrow going forward.

Buy to Let Mortgage Calculator
Find the best rate to suit you. 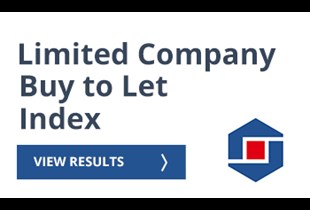