Lenders that offer buy to let mortgages to SPV limited companies are charging only a modest premium of up to 0.25% compared with products for individual borrowers.

These are the findings of the latest Buy to Let Mortgage Costs Index published by independent broker Mortgages for Business.

A simple comparison of all buy to let mortgages on the market in Q4 2015 shows that rates for SPV limited companies are on average 0.79% points higher than rates for individuals.

However, looking more closely at the data reveals that a few “bargain basement” products for individuals are skewing the figures.

Commenting on the findings, Simon Whittaker, finance director at Mortgages for Business said:

The premium added by some lenders to these products is very modest and only covers the increased costs involved, although it’s interesting to see that in the current, highly competitive market, a few lenders have decided to absorb the costs themselves instead of passing them on to the borrower.”

The index also found that in Q4 swap rates saw a modest reversal of the downward trend witnessed since the summer, but already in Q1 2016 there has been a lurch back downwards, helping to keep pricing low.

Bank Rate too is unlikely to rise any time soon due to decelerated growth in the UK and current state of the global economy.

Another factor relevant to the future costs of buy to let borrowing is the stance of the Financial Policy Committee which feels that existing affordability metrics place BTL borrowers in a more vulnerable position to unexpected rises in interest rates or falls income.

It believes that rates of credit loss on buy to let loans has been twice those incurred by owner-occupiers since 2010. (HM Treasury, Open Consultation, Financial Policy Committee powers of direction in the buy to let market, Section 4).

“Write-offs on buy to let mortgages since 2009 have averaged less than 0.2% p.a. and are currently 0.1% p.a. having peaked in 2011/12 at around 0.3% p.a. Any rational person would realise that when lenders typically operate on a Net Interest Margin (for BTL lending) of at least 2% p.a. this represents a loss that should be readily affordable. The reality is that only in two quarters in 2009 were arrears higher on buy to let than on residential mortgages – and thus by that measure buy to let is less risky than normal residential lending.

“The danger is that the Bank of England may seek to impose constraints on buy to let lending which could simultaneously reduce the supply of mortgages and push up the cost of them.”

Mr Whittaker expects that lenders will lobby hard to correct the misunderstandings and hopes that the Bank will wait for the effects of the various tax changes to come to light before taking any further action on the buy to let sector.

When looking at buy to let mortgage products by initial term, the index found that although absolute product numbers in each category rose, there was little change in market share.

Two year rates still accounted account for 43% of all products although they have lost ground consistently to five year rates over the last two years.

Five year rates now account for nearly a quarter of all buy to let products (24%). Loan term products have also increased market share and now make up 12% of products, up from 11% in Q3 2015.

The downward trend of the last three years was continued in Q4 as buy to let mortgage charges continue to have a declining impact on total costs – adding an average of just 0.48% points to the cost.

Finally, the proportion of products with flat arrangement fees fell from 46% in Q3 to 42%.

Products with percentage-based fees (typically 0.5% to 3% of the loan amount) benefitted most from this, rising from 37% of products in Q3 to 40% in Q4.

This shift could be due to lenders looking for ways to claw back some of their margins which have been lost over time to competition.

In general terms percentage based fees are likely to be worth more to lenders than flat fees which are not affected by the ongoing rise in property prices.

Also, as the number of products for SPVs grows, it is interesting to note that the majority of these products have percentage-based fees.

The results of the index and further analysis can be found here. 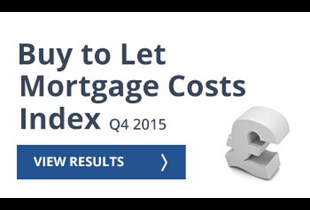