On Friday 30 November, like many other mortgage advisers across the country, Gavin Richardson slept rough to raise money and awareness in support of End Youth Homelessness. Here’s how he got on, what he learned and how much he’s raised so far.

Let me start by saying a massive thank you to everyone who sponsored me. At the last count on Saturday night I had raised £1,765,00. If you haven’t sponsored me and you’d like to, it’s not too late. Any contribution, however small, is welcomed if you can afford it.

It was a pretty surreal experience venturing into Hastings at 10pm with just a sleeping bag and my phone. I decided, based on having no actual plan, to walk about until 2 am checking out places to sleep for later, but stopping and chatting to any homeless person I saw (eight in total but only five were awake or approachable). 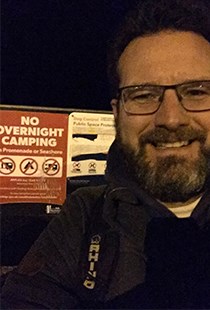 None of the people I spoke to actually asked me for anything, but I’m pretty sure this was more to do with the fact I approached them. I stayed and talked to each person for at least half an hour. It was a really eye-opening experience and it was obvious that, for the most part, their homelessness was down to either a set of tragically unfortunate circumstances or failings within “the system” to support vulnerable people.

For me, the really disappointing discovery of the night was that for every 25 people that walked by only one would stop and acknowledge my existence or that of the rough sleepers I was chatting to. Not even a nod, a sorry or even eye contact. I can only assume that by not acknowledging us, the passers-by could persuade themselves that the homeless community does not exist in Hastings or perhaps they were hoping someone else would deal with it.

Of the four men and one woman I spoke with, two had been attacked this year (one man and the woman). They both felt that the attack was unprovoked and basically just for fun. The man told me he’d been kicked in the face whilst he sat sleeping, propped up inside a doorway.

Between 2am and 3am I sat in a doorway in the town centre and chuckled at the drunks and teenage wannabe tough guys who were invincible and ready to take on anyone who looked at them due to the confidence a 2-litre bottle of Tesco’s own cider can give you.

As it had started to rain at 2.30am my legs were getting damp and the last of the gobby little t**ts revellers had gone home, I moved to bed down in my first choice shelter on the sea front. After about 10 minutes I was disturbed by a crowd of idiots believing they were the undercard to the Wilder vs Fury boxing match. Three police cars, an ambulance (to take away the female who had face planted the pavement) and witness statement later, it was time to move on…

Now a bit more than damp I found another shelter and sat and felt the rain come in from all sides. There was absolutely no chance of keeping dry but luckily it stopped quite soon after my arrival. The benches however were impossible to even sit comfortably on, so I moved again.

At 4.30am I took a moonlit stroll along the sea front (and maybe a game or two of hopscotch). I was amazed at how many other people were out on their own at this time of the night/morning.

I had just I folded myself up in the corner of shelter number three by the pier, when at 4.45am the White Rock hotel opposite evacuated all its guests following a fire alarm. Whilst I wasn’t dry, I was certainly warmer than the guests huddled around in their pyjamas and dressing gowns as bemused firemen confirmed, I suspect, that some berk had lit a cheeky ciggy in their bathroom! 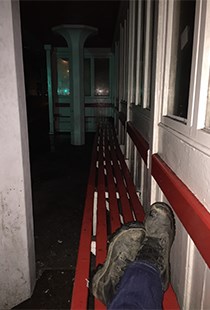 5.30am now and all was quiet. Pins and needles in everything below my waist was not what I anticipated to be the biggest challenge of the night but made for what I can only guess was a pretty strange walk back up the seafront to while away the last hour.

At 6.30am I called it a night and walked back to my car, sat in it for a few minutes to de-mist the windscreen and promptly fell asleep for 20 minutes.

What did I learn? 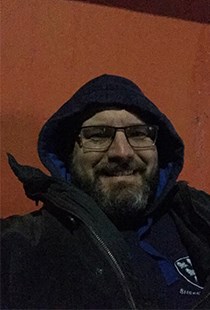 Thank you again for all your sponsorship. And if you’d like to donate, here’s the link again: